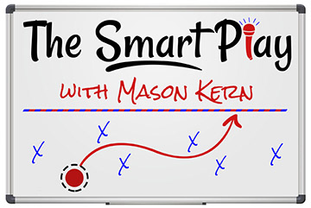 Among other endeavors, multi-platform sports broadcaster and reporter Mason Kern is Host of "The Smart Play Radio Show" that airs on KDUS AM 1060, which is a SB Nation Radio affiliate in Phoenix—a station serving all of the metro Phoenix area (top-ranked as the 14 U.S. radio market). On this fun and fast-paced program Mason spotlights newsworthy current events and happenings in the world of professional and college sports. This includes hot topic headlines; interviews with powerhouse guests like NBA All-Star and basketball Hall-of-Famers, as well as NFL Hall of Famers and serious playmakers in the NFL, MLB, NHL and beyond. Show also features a dedicated “Happenings on the Hardwood” block for comprehensive basketball analysis.

Mason also regularly serves as a Sportscaster, Commentator and Host for various other radio, TV and online media outlets across the U.S. This includes live sportscasts on AZTV7’s “The Arizona Daily Mix” show, as well as prior live appearances with Good Morning Arizona, ABC13 Las Vegas, multiple KUSI-TV San Diego (as a member of their sportscasting team) and other shows where he’s delivered insightful pro and collegiate sports reports. Before that, Mason was a regular correspondent withThe CW’s “San Diego Living” show where, in addition to providing analysis on pro and collegiate athletics, he's also showcased sports and fitness product innovations in his own monthly “branded segments.

In addition to hosting his own half-hour Radio Show called “The Smart Play” on KDUS Sports Radio AM 1060 in Phoenix (formerly the region’s NBC affiliate when his show commenced and currently with SB Nation), now in its third year o-the-air, Mason also currently co-hosts  the ”Bragging Rights” Radio Show on Blaze Radio--Arizona State University’s affiliate station. Mason has also served as a frequent radio guest with the “Sports Hangover” Show, also on KDUS, delivering recurring current event-based sports commentary as their “Phoenix Suns insider,” among other radio shows he’s been a featured guest on.

Mason is also an established multimedia sports reporter and broadcaster in the Phoenix market, currently serving as the Deputy Editor for Sports Illustrated Online’s Arizona Cardinals-focused platform. He concurrently serves as a multimedia journalist for Sun Devil Source on the CBSi owned/operated 247Sports Network, where he covers while playing both at home and on the road Arizona State football and basketball. He also provides keen analysis and interviews pro athletes and other sports industry thought leaders for his syndicated editorial work with Court-Side.com, LakeShowLife.com (a Fansided.com property) NYSportScene.com, LinkedIN.com, StewardshipReport.com, Influential-Magazine.com, and TheSmartPlay.net (his own brand), among other distribution platforms and pursuits.

So prolific is Mason’s work that in June, 2018, he was named among PHOENIX magazine’s esteemed “40

Under 40,” which featured achievers in the region who are “crushing it.” Just a few months prior to that, Mason was featured in Scottsdale’s UPTOWN magazine with a headline affirming “Mason Kern’s Got Game.”

Mason, himself a highly skilled soccer and basketball athlete, commenced broadcasting early in his sophomore year in high school (2014-2015) when he was just 15 years of age. As a high-performing academic scholar, he was accepted with distinction to Arizona State University’s esteemed Walter Cronkite School of Journalism and Mass Communication, one of the premier journalism programs in the nation, where he’s since earned his place within the ASU Chapter of the National Society of Collegiate Scholars (NSCS). Even before attending college, in 2015, Mason was also extended the invitation-only honor to attend (and did attend) the prestigious 2015 Washington Journalism and Media Conference in D.C. as a National Youth Correspondent.